Julio Bortolazzo led College of San Mateo at a critical time. He and trustee Eleanore Nettle led the acquisition and construction of today’s College Heights campus, as well as the 25-year master plan that called for today’s three-campus community college district. During Bortolazzo’s tenure, district enrollment grew from 7,000 day and evening students in 1956 to more than 20,000 in 1968.

Bortolazzo (1915–2006) was a first-generation American, an Italian grocer’s son from Santa Barbara. He entered school speaking no English and went on to get an Ed.D from Harvard. His idealism and energy steered growth in a prosperous time when creating entire college campuses on bare ground was far more feasible than it would be today.

A Cold War liberal in the John F. Kennedy mode, Bortolazzo believed in the power of democracy, big government and big institutions to smash ignorance and poverty. Like his best-known predecessor, college president Charles S. Morris, he had the energy and social facility to connect with all kinds of people, helpful in passing the several San Mateo County bond measures that funded College Heights, then Skyline and Cañada colleges. An early riser, he was at his desk by 6 am. 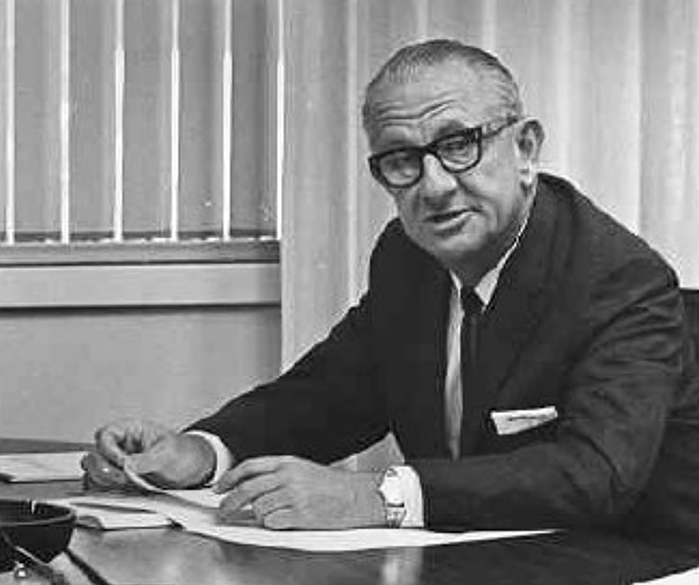 To this end, Bortolazzo launched a provocative speaker series that brought politicians and activists to the sparkling new campus. Erich Fromm spoke. Barry Goldwater spoke. Bob Dylan sang (on Dec. 11, 1964, opening his set with ‘The Times They Are A-Changing’).  Conservative local publishers who had praised Bortolazzo’s hiring and backed his bond measures were enraged when he brought the head of the local Communist Party to speak on campus. Unbowed, Bortolazzo doubled down by booking another Communist, Bettina Aptheker, and debating her himself.

He explained:“Those of us who advocate that college be a marketplace of ideas believe in American institutions even more than those who would deny unpopular views of minorities to be heard.”

In 1966, inspired by the civil rights actions in Selma, Ala., Bortolazzo greenlighted CSM’s College Readiness Program to nurture Black learners. The program drew wide attention and furthered CSM’s national reputation. By 1968, more than 10,000 educators and dignitaries had toured CSM’s campus.

Bortolazzo was idiosyncratic in many ways. At the height of the Vietnam War, he insisted that anyone on campus at 8 a.m. stand at attention while the U.S. flag was raised. He smoked cigars, but banned cigarette machines from campus after the 1964 U.S. Surgeon General’s report linked tobacco to cancer. It baffled him that students wanted to end the dress code, because he thought professional dress showed respect for learning. Yet he agreed to shelve the code in 1966, two years before many other colleges.

If criticized, Bortolazzo issued another standby line: “It is impossible to be perfect when you try to educate the upper 100 percent of high school graduates.”

He gave students unusual latitude in what literature they could distribute on campus—until they crossed a sometimes tenuous line. He caused student Aaron Mangianello, who in 1965 refused to stop soliciting for a cause Bortolazzo thought was linked to the Viet Cong, to be forcibly removed from campus. Mangianello resurfaced after Bortolazzo’s departure as a College Readiness Program staffer. Administrators’ demands that CRP fire Mangianello contributed to protest during the 1968 uprising.

Bortolazzo could micromanage. He was deeply involved in all phases of College Heights’ construction in a way some say caused it to be late and over budget. On the flip side, his eye to detail and his open door made people feel acknowledged and heard. CRP coordinator Jean Wirth said she believed the 1968 uprising would not have happened if Bortolazzo had still been there.

By then, however, Bortolazzo said he had “come to a point in my life when I can’t understand the youth of today.” His original mission largely complete—Cañada was open and Skyline nearly so—he said, “I have been very vocal about my discontent with being head of a multi-college operation. I can’t see myself cooped up in some off-campus office with a Xerox machine and a secretary.”  He announced his resignation in April 1968.

The fountain and open space in front of CSM’s library were for years called Bortolazzo Square in his honor.